THE CHURCH OF SAN MATTEO IS REACHED BY FOUR ALLEYS, NOT FAR FROM PORTA SAN BIAGIO; IT CONNECTS ROMAN BAROQUE FORMS TO THE TRADITIONAL DECORATIVE CARVING OF THE LOCAL STONE. ON THE EXTERNAL FAÇADE, THE CONCAVE AND CONVEX SURFACES TYPICAL OF BORROMINI ART DOMINATE, WHILST INDOORS THE RICH ALTAR STRUCTURES REVOKE THE TYPICAL LECCE TRADITION.

The church, belonging to the Franciscan Terziarie order, on bishop Luigi Pappacoda’s request, was realized between 1667 and 1700 by Giovanni Andrea Larducci in the place of a previous structure of the fifteenth century.

The convex façade of the first order and concave in the second one with scales and ashlar decoration is particular for its pseudo elliptic layout, elements taking distance from the local tradition revoking the Borromini Roman Baroque.

The interior, besides many altars in the typical Salento Baroque style, hosts the twelve Apostle statues, a work of Placido Buffeli, and a late gothic fresco coming from the Church of Santa Maria della Luce. 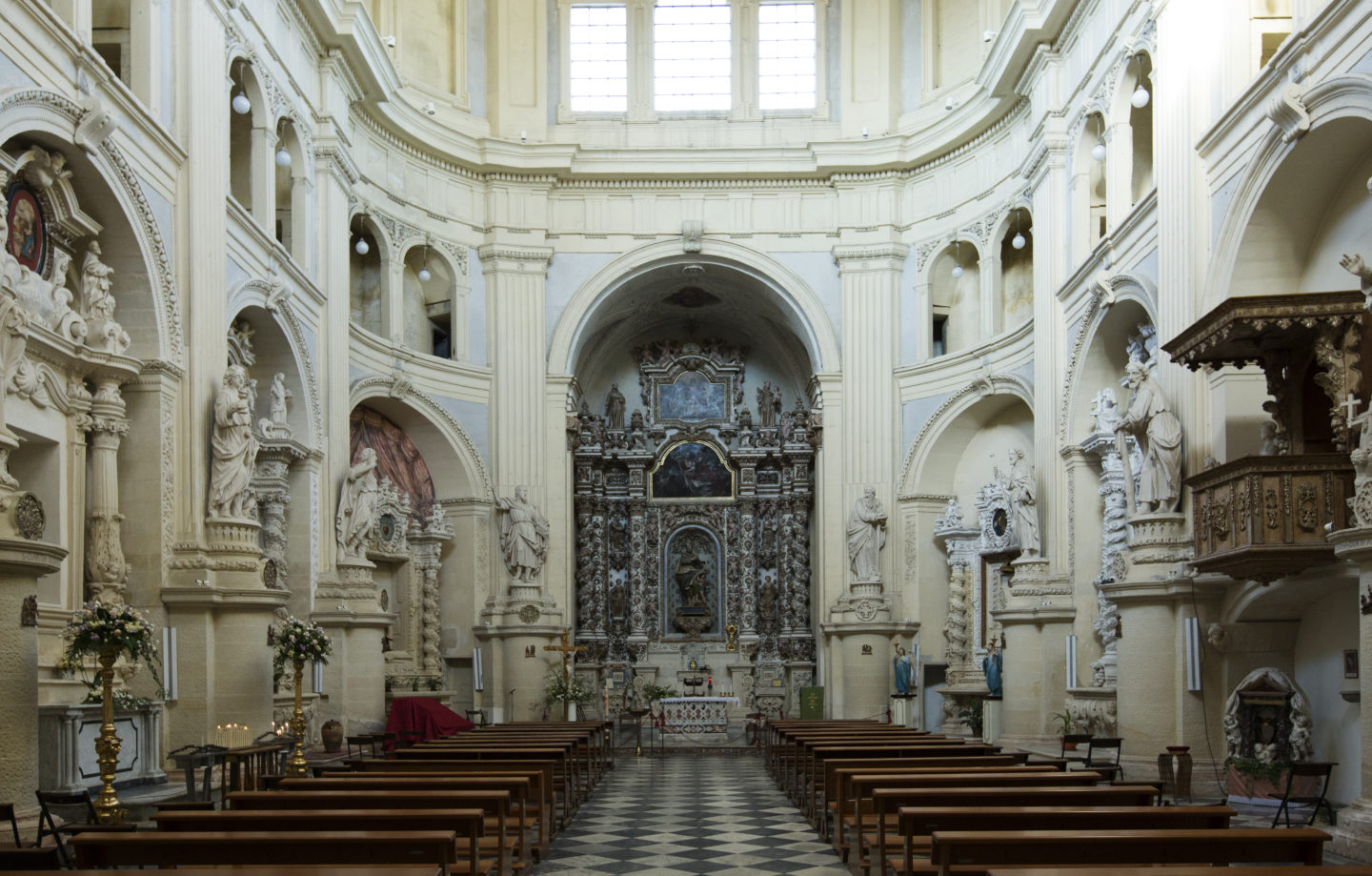 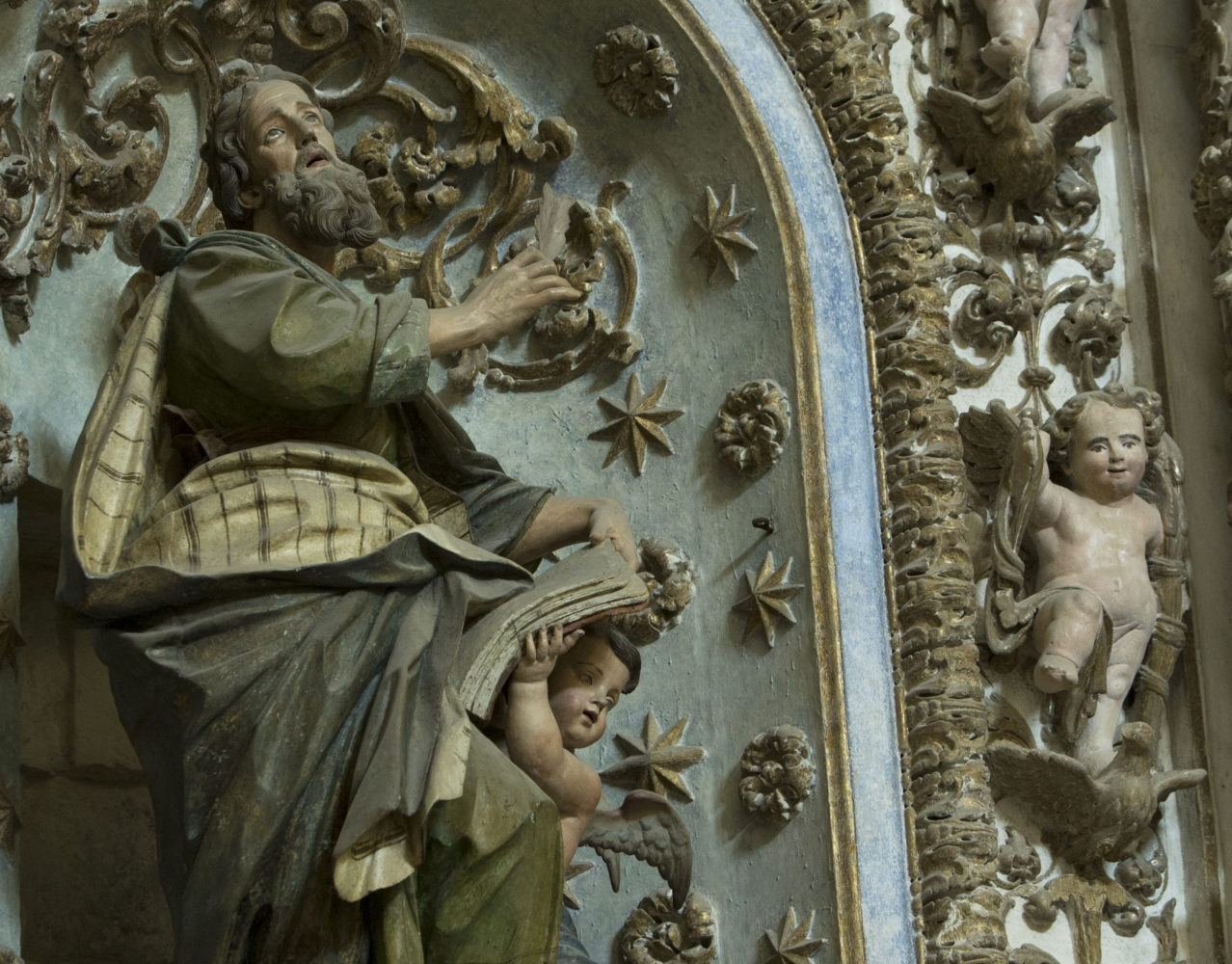 The altar named after San Matteo is a particular example of Lecce Baroque for its decorative richness and the polychromy that still today characterizes it.

Among the sinuous spiral columns, you can see the statues of San Luca, Santa Caterina of Alessandria, San Marco and Santa Elisabetta of Hungary on rich pedestals. A particular blue background alcove, decorated with stars and flowers and surrounded by a putto’s crowd, hosts San Matteo wooden statue, realized in 1691 by the Naples sculptor Gaetano Patalano.

Above, between the statues of San Francesco from Assisi and of Sant’Antonio from Padova, the Assumption painting.

The central painting shows an angel carrying a torch in memory of the miracle of the escaped plague giving birth to the Church of Madonna della Luce in the fifteenth century. After the demolition of the building, the parish title went to San Matteo Church.

Inside a Baroque frame, the altar houses one of the few examples of the figurative medieval art of Lecce. It is a beautiful fresco fragment, brought in San Matteo Church, together with the parish title, from the destroyed little church of Madonna della Luce.

The fresco, realized in 1400, represents a tender image of the Virgin of the Milk, with Mary on the throne breastfeeding Baby Jesus. The symbols predicting the announcement of the Passion and Resurrection of Christ, the swallow in Jesus’ hand and the coral on the neck, contrast the sweetness and intimacy of a daily life scene. 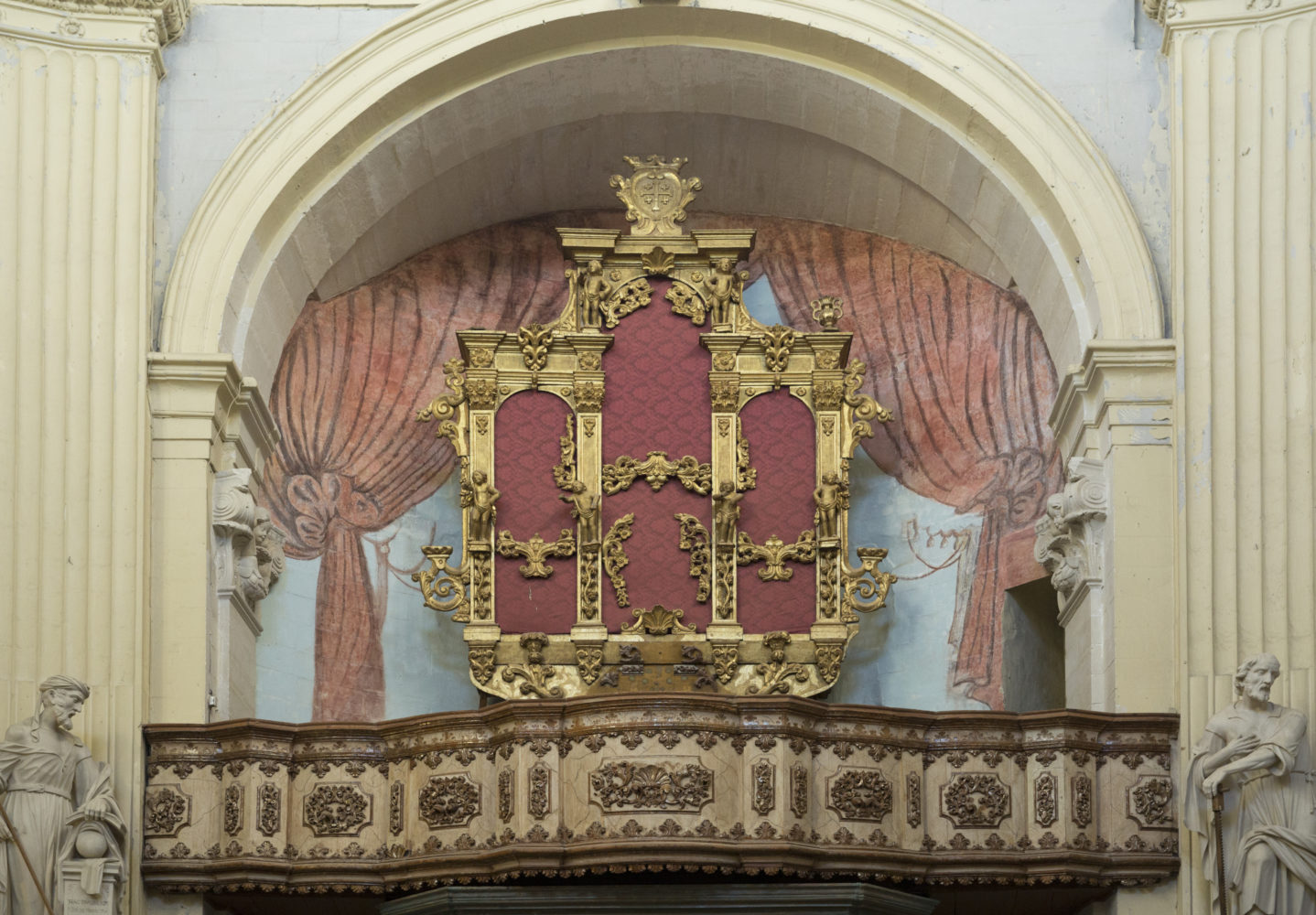 As soon as you enter the church, look up at the portal, the refined wooden choir appears, as a mixtilinear parapet and decorated with palmette festoon, adorned, plant form motives, shells in relief. It supports the precious wooden carved and golden case of a three aisles organ. It was realized for Santa Croce Church in 1735, replacing the most ancient one destroyed by a fire, from the master Carlo Sanarica from Grottaglie, author of many Salento instruments, based on a drawing of Francesco Antonio Piccinni. After the elimination of the Celestines order and after Santa Croce Church was abandoned, the organ was firstly moved to the Cathedral, where it worked till 1910, the year when it was replaced by an electrical instrument, and in the end taken to San Matteo church where it found its final destination.