IT IS NAMED AFTER THE ASSUMPTION AND INTEGRATED IN THE SPLENDID FRAME OF THE CATHEDRAL SQUARE, AMONG THE BELL TOWER, THE BISHOP’S PALACE AND THE ANCIENT SEMINARY’S ONE. THE CATHEDRAL APPEARS AT THE TOURISTS’ EYES WITH ITS SIDE FAÇADE WHILE THE MAIN ONE SEEMS NEARLY HIDDEN. A FAÇADE THAT ZIMBALO MAKES RICHER TO HOUSE, IN A TRIUMPHAL ARCH, THE NEW STATUES OF THE PATRON SAINTS, ORONZO, GIUSTO AND FORTUNATO.

Thanks to the bishop Luigi Pappacoda the church gained its current aspect, erected since 1659, enhancing the person of Sant’Oronzo, who three years earlier saved the town from the plague, becoming the patron. The work was committed to the great architect and sculptor Giuseppe Zimbalo, who lead it from 1659 to 1670.

The rebuilding of the bell tower was committed to the same architect, previously located to the side of the main façade, set up in the east side of the square. Works lasted from 1661 to 1682, as reported in the epigraph of the penultimate lancet window.

The characteristic baroque decoration stands out on the lateral façade, hosting the patron Saints, Oronzo (above), Giusto and Fortunato, while the main façade looking at the Bishop’s Palace is more classical and linear.

Many altars, made up of marble and Lecce stone, enrich the inside of the church, divided in three aisles by strong pillars. 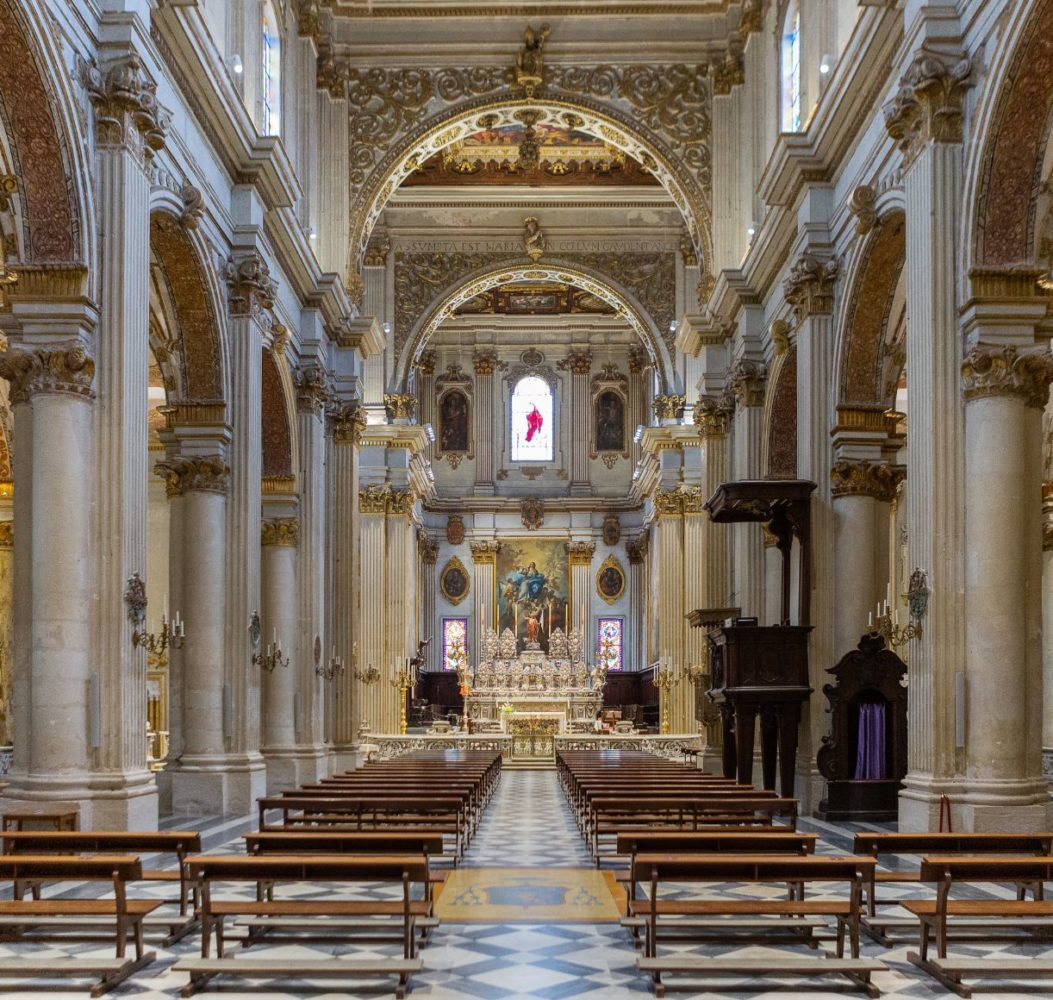 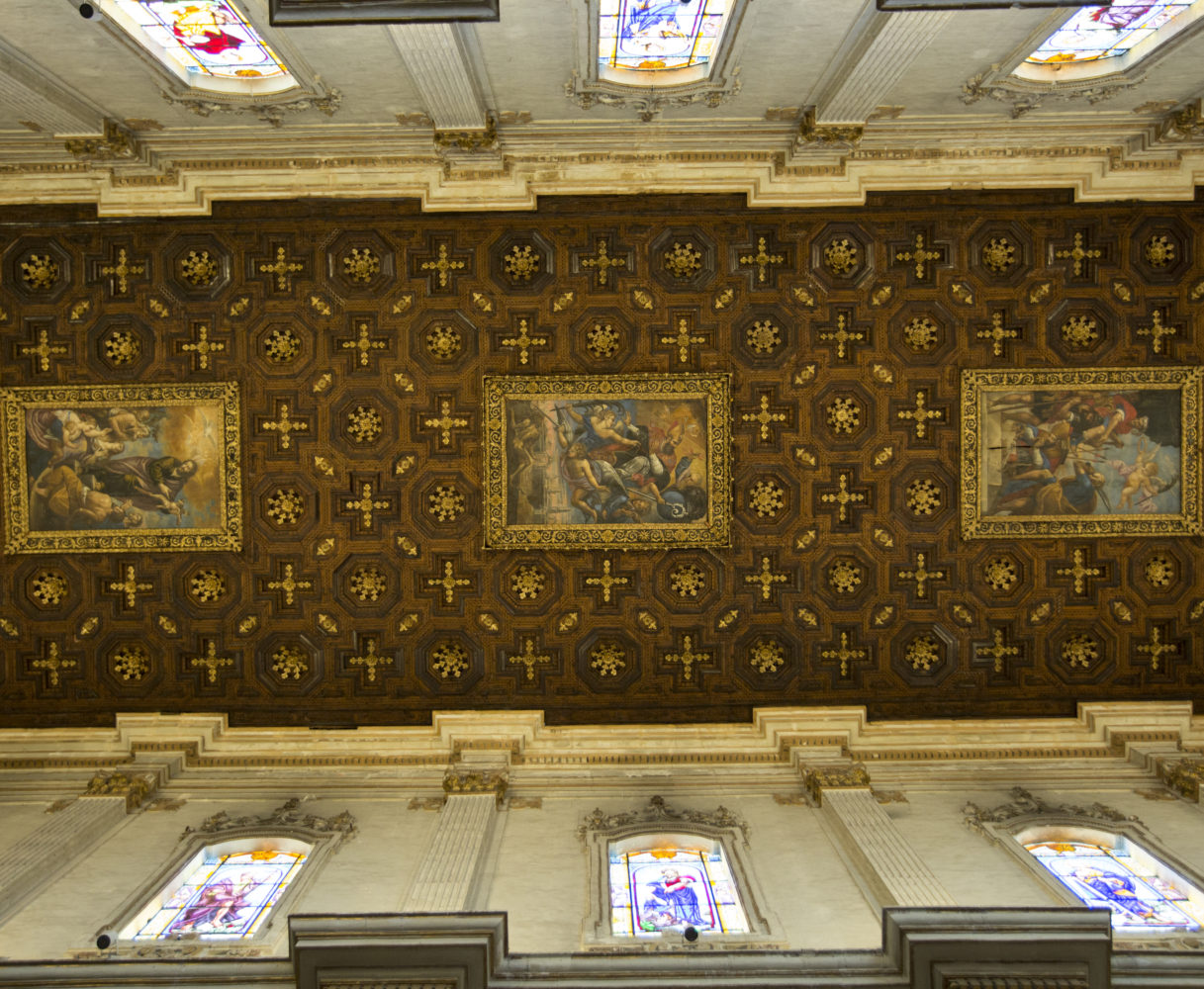 A carved wooden precious false ceiling of the seventeenth century enriched with gildings covers the central aisle. In the weft of the greek or octagonal cross lacunar ceiling, three paintings, attributed to Giuseppe from Brindisi, tell the most significant episodes of the patron Saint life.

In the painting closer to the transept “the preaching” Sant’Oronzo, not yet bishop of the town, divulges, with the crucifix in his hands, Christian Religion in Lecce and all over the Salento area, still heathen during the Roman domination.

In the painting closer to the false façade “Sant’Oronzo’s martyrdom”, the Saint, represented as the first bishop of Lecce, is going to be beheaded during the Christians’ persecutions by the Emperor Nero.

At the center of the ceiling the painting representing “The protection from the plague” in which Sant’Oronzo from the sky keeps away the plague from the town. Lecce is represented with the defensive walls and the architecture which characterized the town in the seventeenth century. Outside one of the town gates the personification of the plague in 1656.

The town’s patron Saint is celebrated in a grandiose altar in the transept on the right, completely realized in polychrome marble.

Sant’Oronzo is represented in the center in a painting of Giovanni Andrea Coppola (1656), a painter from Gallipoli, where he is portrayed as a winner on the paganism. At his feet, in fact, an idol of a divinity fallen into decay. The other two patrons of Lecce find their place in two lateral alcoves: San Fortunato to the right and San Giusto to the left. The narration of the patron Saint story continues in the second order of the altar with the representation in the two alcoves of Santa Petronilla to the left side, the roman matron who gathered the remains of Sant’Oronzo and to the right side of Santa Emiliana, the Saint’s sister.

According to the tradition, Sant’Oronzo lived in the 1st century A.D. during the Roman domination in Lecce. The story tells that together with his nephew, San Fortunato, during a hunt in San Cataldo met San Giusto, Saint Paul’s disciple travelling towards Rome. The two of them converted to Christianity and began their work of proselytism. Sant’Oronzo, considered the first bishop of Lecce, was persecuted and suffered martyrdrom during the time of Nero’s emperor. He was beheaded in a place, not far from Lecce, where the “Sant’Oronzo’s head” church arises. A matron from Lecce, Santa Petronilla, gathered his remains and, according to a tradition, they would rest inside the Cathedral, under the last pillar to the right of the central aisle. The three Saints are celebrated from 24th to 26th August. 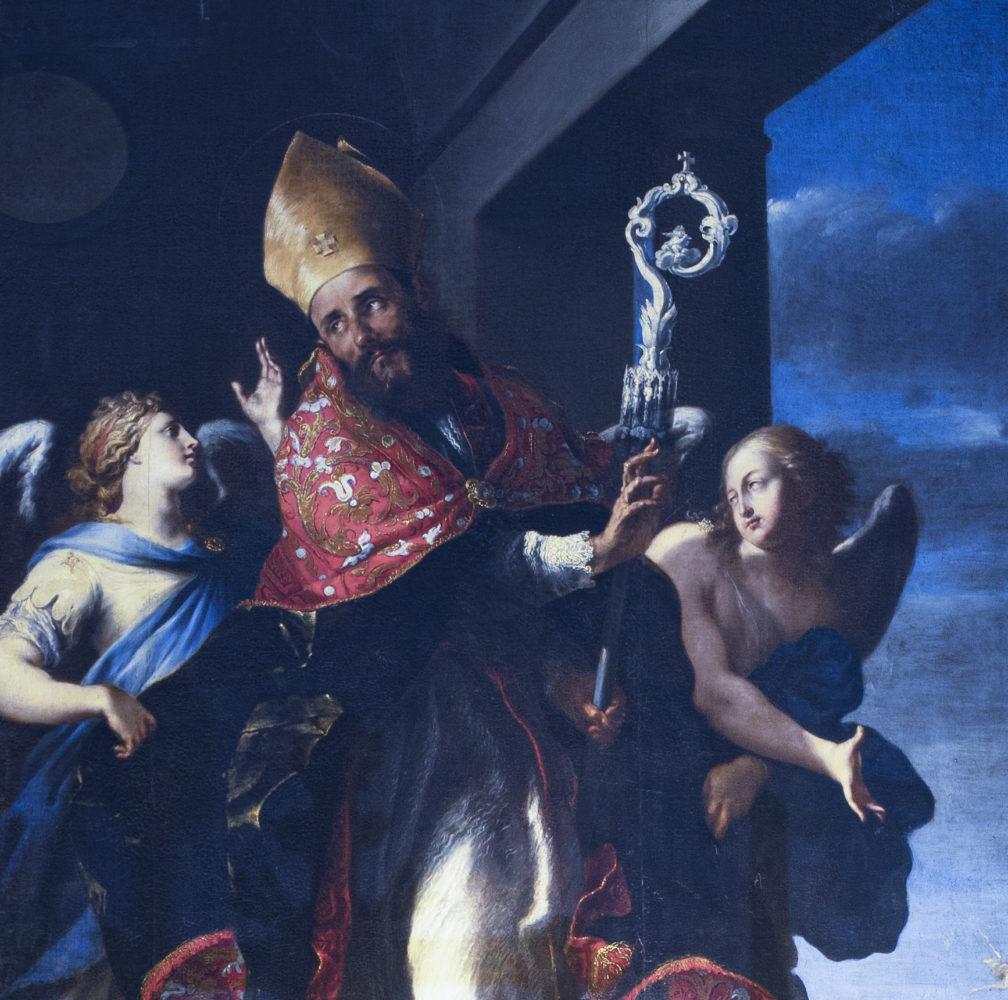 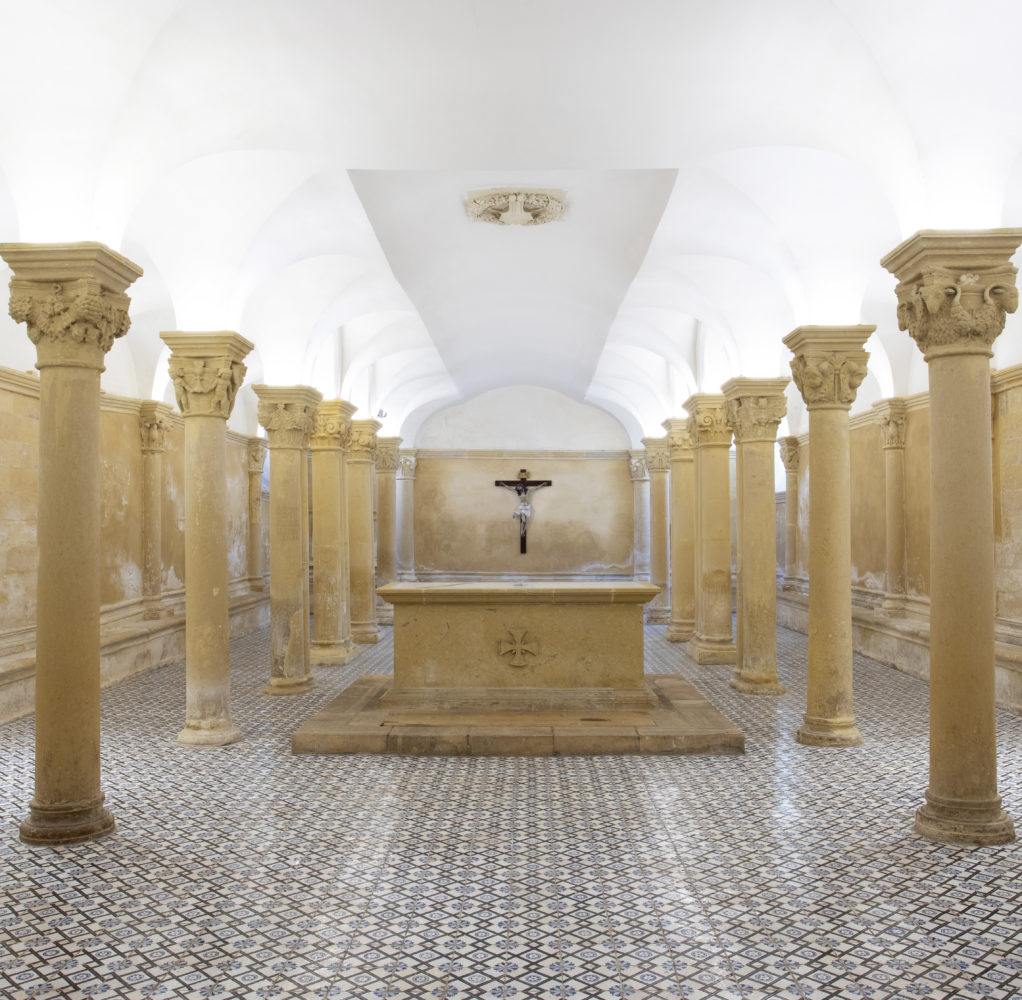 Two staircases from the side aisles lead to the Cathedral’s Crypt, dedicated to Santa Maria della Scala. The contrast between the richness of the superior church and the sobriety and linearity of the underground church, dating back to the first half of the sixteenth century, catch the visitor’s attention characterized by the monocromy of the light Lecce stone and by a thick series of columns and semicolumns with capitals adorned with different decorative motives.

This aspect is partly the result of the restoration of the mid of the twentieth century, that renovated the aspect of the sixteenth century removing most of the baroque additions. Four altars of the seventeenth century persist only on the side walls.

Two particular pillars show the two emblems of Lecce. The most ancient one represents a crowned tower, the original bell tower of the Cathedral built in the medieval age in memory of the tower in which Santa Irene, ancient patron of Lecce, was imprisoned.

The Crypt, used as a sepulchral area, shows on the floor, in addition to many funeral epigraphs, little wells where the dead people and the ossuaries were deposited. Other burial places have been recently rediscovered under the Cathedral nave’s roof.